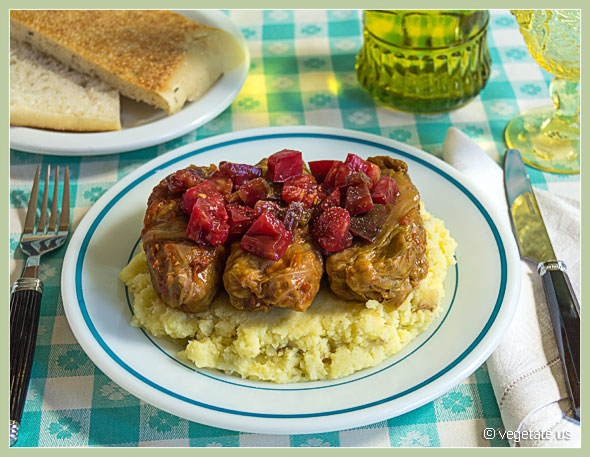 “The time has come,” the Walrus said, to talk of many things: of shoes–and ships–and sealing-wax–of cabbages–and kings–and why the sea is boiling hot–and whether pigs have wings.” — Lewis Carroll, from Through the Looking-Glass and What Alice Found There, 1872

Slow cooking really brings out the flavors in food and makes foods like these so tender they just melt in your mouth.

Cabbage Fact: Cultures in which cabbage is a staple food, such as in Poland and some parts of China, show a low incidence of breast cancer. Research suggests this is due to the protective effect of sulfur-containing compounds in cabbage.

“Everything I do, I do on the principle of Russian borscht. You can throw everything into it beets, carrots, cabbage, onions, everything you want. What’s important is the result, the taste of the borscht.” — Yevgeny Yevtushenko, Russian poet

This slow-cooked “Seeing Red” Borscht from Fresh from the Vegetarian Slow Cooker, page 53, is so tender and flavorful that it really justifies the Russian proverb, “Better fed than taught.” This earthy soup was a steaming cauldron of chopped beets, carrots, potatoes, onions, bell peppers, and spices.

We topped it off with some Sour Dressing from Vegan Deli, page 123 and fresh dill.

The crusty, warm, buttery beer bread on the side was from Cookin’ Crunk, page 140. I can’t tell you how simple this bread was to make. The beer and baking powder give it it’s lift, so there’s no need to add yeast and let the dough rise. You just mix the few, simple ingredients in a bowl, pop the dough into your bread pans, and bake. About an hour later you’ve got the freshest, tastiest bread ever! We used a nice hoppy, organic German beer for ours, but you could use whichever brew you prefer.

Borscht Facts: Borscht is a soup made mostly from beets. It began as a specialty of Eastern European cuisine, primarily of the poorer people (beets were inexpensive). The soup dates at least to Medieval times.

We love this cabbage roll recipe from Fresh from the Vegetarian Slow Cooker, page 160, not only because these tender & tasty rolls literally melt in your mouth, but also because they are so easy to make it seems like little elves are doing the work for you while you, say… read a book, go for a walk, or take a nap!

We served these with some carrots that we’d peeled, steamed, and then whipped up with some dairy-free butter using our immersion blender, as a more nutritious substitute for mashed potatoes.

I’d rather eat one of these cabbage rolls than a little pigeon any old day! 😉

Recipe from Fresh from the Vegetarian Slow Cooker. Made in our beloved Sanyuan Chinese purple clay slow cooker, so easy! Sort of like Beefy Mac, but not from a  can. We doubled this recipe, made it with spelt noodles so that it was wheat-free, and served it with cheesy nutritional yeast sprinkled on top and french bread, nom!