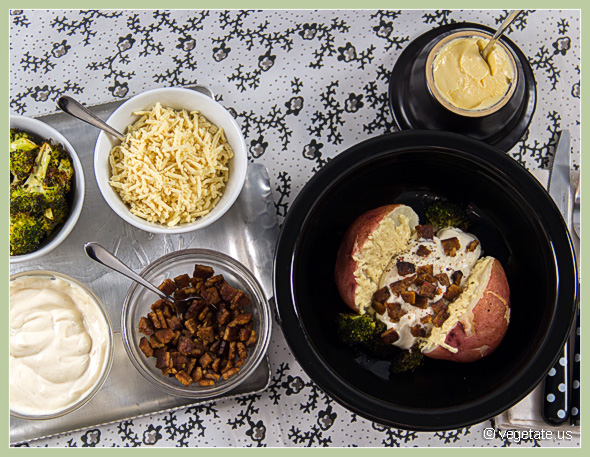 “What I say is that, if a man really likes potatoes, he must be a pretty decent sort of fellow.” ― A.A. Milne

Maybe it has something to do with my Irish roots, but I LOVE potatoes! My husband Keith and I decided to put our homegrown red potatoes to the test via a vegan baked potato bar, and they definitely passed!

Keith claimed he’d already had more than his share of baked potatoes during his college years, since as a vegetarian that’s about all he had to choose from at his school’s cafeteria, but he couldn’t get enough of our baked potato bar!

Potato Facts: The potato is was first domesticated by the Andeans of South America at around 500 B.C., and the Inca grew thousands of varieties of potatoes. 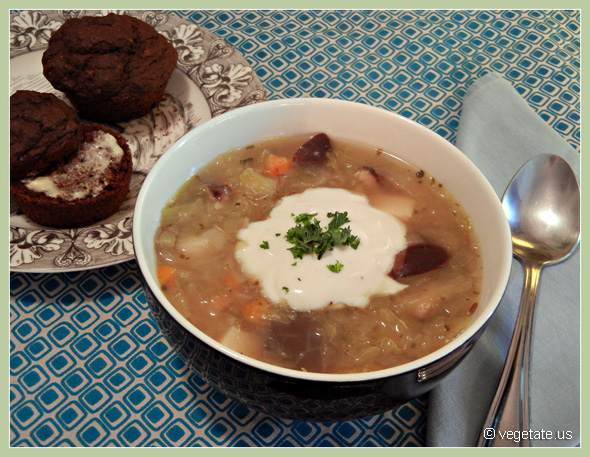 Okay, so maybe Dr. Seuss didn’t care much for sauerkraut, but we love it! Not only is it delicious, it is also extremely high in vitamins C, B, and K, and the lactobacilli created when fermenting cabbage into sauerkraut aids digestion, raises vitamin levels, produces beneficial enzymes, and promotes the growth of healthy flora within the digestive tract.

Both of these recipes are from Terry Hope Romero’s fabulous new cookbook, Vegan Eats World. The Sauerkraut Mushroom Soup is on page 130, and the Coriander Rye Muffins are on page 202. We topped the soup with some delicious Sour Dressing from Vegan Deli page 123, and fresh parsley. 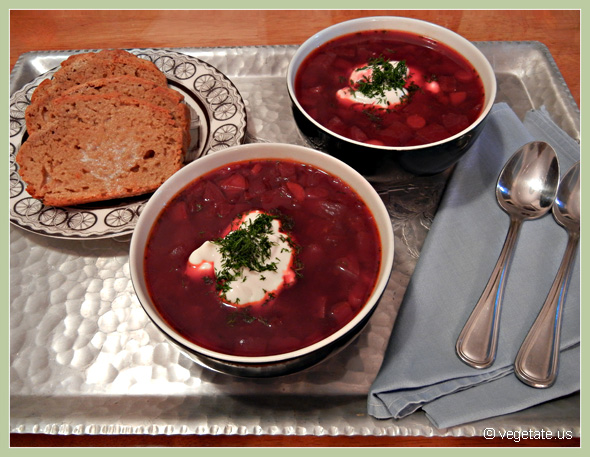 “Everything I do, I do on the principle of Russian borscht. You can throw everything into it beets, carrots, cabbage, onions, everything you want. What’s important is the result, the taste of the borscht.” — Yevgeny Yevtushenko, Russian poet

This slow-cooked “Seeing Red” Borscht from Fresh from the Vegetarian Slow Cooker, page 53, is so tender and flavorful that it really justifies the Russian proverb, “Better fed than taught.” This earthy soup was a steaming cauldron of chopped beets, carrots, potatoes, onions, bell peppers, and spices.

We topped it off with some Sour Dressing from Vegan Deli, page 123 and fresh dill.

The crusty, warm, buttery beer bread on the side was from Cookin’ Crunk, page 140. I can’t tell you how simple this bread was to make. The beer and baking powder give it it’s lift, so there’s no need to add yeast and let the dough rise. You just mix the few, simple ingredients in a bowl, pop the dough into your bread pans, and bake. About an hour later you’ve got the freshest, tastiest bread ever! We used a nice hoppy, organic German beer for ours, but you could use whichever brew you prefer.

Borscht Facts: Borscht is a soup made mostly from beets. It began as a specialty of Eastern European cuisine, primarily of the poorer people (beets were inexpensive). The soup dates at least to Medieval times. 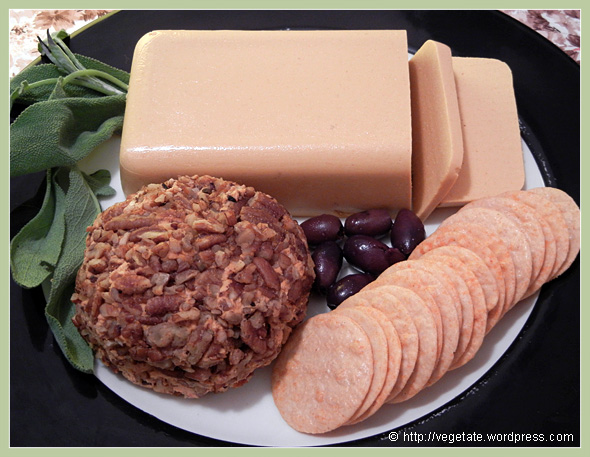 Craving a tasty snack? Fix yourself a cheeze platter! 🙂 Tempeh pimiento cheeze ball from 1,000 Vegan Recipes, page 19, and smoked “gouda” from The Ultimate Uncheese Cookbook, page 161. Served with rice crackers and kalamata olives. Both of these dairy-free cheeses were delicious and really easy to make as well as gluten-free, wheat-free, and sugar-free. The “gouda” was made using carrots, cashews, nutritional yeast, agar flakes, tahini, lemon juice, liquid smoke, and mustard. The cheeze ball was made from tempeh, pimientos, vegan mayonnaise, soy sauce, and nutritional yeast, and then rolled in tasty toasted pecans. Say cheeze! 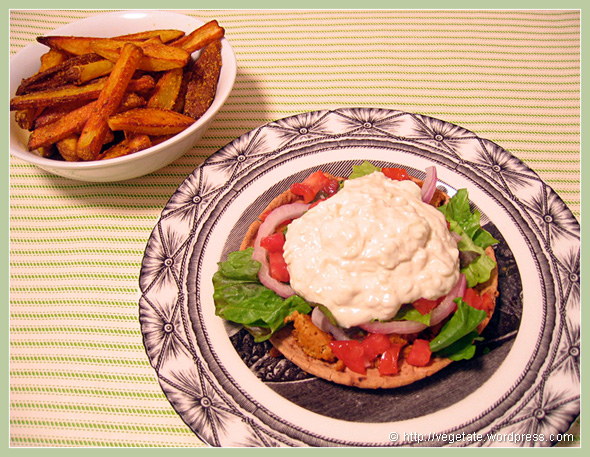